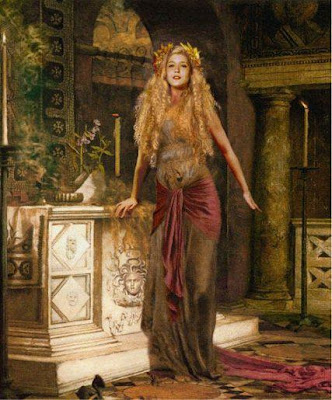 Wiccan beliefs are somewhat hard to pin down because a diversity of belief exists within the religion. This diversity is seen most clearly on the idea of a God or a divine being.
Some Wiccans are monotheistic, in that the recognize one primal divine reality called "All" or "The One." Language of either "god" or "goddess" may be used here to refer to "The One", but the god and goddess are viewed simply as male and female dimensions of one single deity or divine reality.
Some Wiccans are dualistic, in that they recognize two divine realities - a male and female. God and Goddess, Lady and Lord, Goddess and her Consort "the horned one" - these are all terms used by those within this group of Wiccans. These terms hearken back to names for gods in ancient religions.
Other Wiccans are polytheistic, in that they recognized the existence of many ancient deities. These include Pan, Diana, Dionysus, Demeter, and many others. Again, this is a hearkening back to ancient traditions and attempting to revive them in some way.
Finally, some Wiccans are atheist or agnostic in their beliefs about a god. They see God and Goddess as symbols or metaphors, not actual living entities. They may view these terms as referring to energies or principles in life or nature, but not as actual beings.
Other common Wiccan beliefs include:


Respect for nature - all living things are regarded as having or containing a spirit or an essence worth respecting. Wicca is widely regarded as an earth religion, very grounded in natural cycles, seasons and processes. Much of its ritual deal with bringing harmony and healing both to nature and to the self by becoming attuned to nature.

Gender Equality - Wiccans celebrate the sexual polarity in nature, and view the female as equal to the male. Some even view the female as superior in some respects, but in general male/female balance is an important concept in Wiccan belief.

Human Sexual Freedom - Wiccans are generally very liberal regarding human sexuality. It is seen as a gift from God, Goddess or Nature to be valued and engaged in with joy and responsibility. They affirm 3 natural sexual dispositions: heterosexual, homosexual and bisexual. Some Wiccans celebrate what is called the "Great Rite" - a type of ritual sexual activity that was practiced in temples in ancient Greek and Roman religions (among others) - but this is mostly done in private by a committed couple, or it is done symbolically in the ritual dipping of a knife(male) within a chalice (female).

Afterlife - Wiccans hold a wide variety of beliefs about afterlife. Some believe in ancient legends that speak of souls going to a place after death, reviewing their lives, and even being reborn into a new baby. Others envision themselves living on after death in nature via natural decomposition (in the soil or in other living beings). Also, some Wiccans envision an afterlife solely in terms of one's memory and influence in the lives of those left behind.