On a Blue Moon 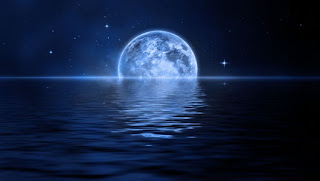 It was a summer night on a blue moon (the second full moon in a month, happens every two to three years. It is said that a blue moon has more power then a regular full moon.)
I was told by a Babalao (an African priest I see) that I should make an offering to Ochun (the goddess of the river) as she takes care of me. Because he knows there aren’t a lot of rivers in LA he sent me to the ocean as all rivers end in the ocean.
I planned it all out, and invited one of my best friend, who is a Christian but has an open mind. I told her to shower before we went and to wear white. We both did that. We planned to drive to Arizona that weekend to have a personal reading with the Babalao, so we drove from LA to San Diego. Stopped on a beach near there. 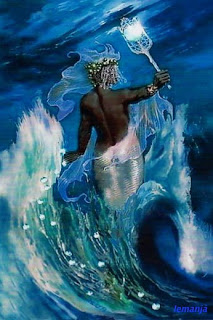 As we got out of the car and began to walk, I remembered I left my offering (white flowers). I turned back, while my best friend slowed down. As I walked back my friend was about 30 feet ahead of me. As I looked down the path way I saw a lady looking onto the sand the ocean being in from of me, she was looking to the side into the darkness. I remember thinking “what is she looking at, is her family there?”
As I came up to the place where she was at, something inside told me to look, because I had forgotten Well, there was no lady there instead there was a sign with the name of the beach. At that moment I called out my friends name and told her “I just saw a lady standing there”, she turned and said “no way, I did too.”
We told each other what we saw, a lady with long hair in dark blue or black dressing a skirt or long dress.
We went ahead and did all that we where there to do. And left. On our way to Arizona, we could not believe what we had seen and tried to explain it but couldn’t.
I told the babalao about it. He said that was Yemaya (the goddess of the ocean).
And that is the closest story I have to a ghost story. Was it a goddess or ghost? I don’t know.