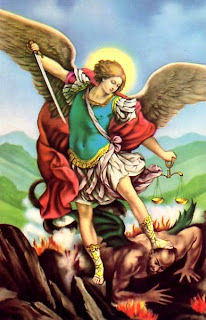 My partner and I have been discussing the bible, its stories, mythology, movies and our research on line of the concepts of good vs. evil, angels vs. demons and the like.

Many religious scriptures speak of theses beings, which had the power of flight, some are depicted with wings and others are not.

What I have gathered from these stories is the following. There was a time that all lived happily, until one day the Angel Lucifer the most beautiful of all thought he was better then God , which might of been a King of some sort and/or alien. The King/God/alien then casted Lucifer and his followers to Earth, I read somewhere it was 200 of them. Wikipedia makes mention of 72 demons each have their own legions they command and each have a given task/duty/powers.

Then we have the Archangels, Angels and other beings that help the King/God/alien agains evil. They too have a task/duty/powers.

I usually refer to good and bad as energy but never really thought of energy as having a purpose on its own. I thought we gave it a purpose, if that makes sense at all.

There are hundred of stories of people who have killed who insist that they did so because they where told by the devil or what they believed to be the devil because who or what else would tell a person to harm another. So, they claim that they simply followed the orders they where given.

I will give you a very personal example. I have a wonderful life and would never think of harming my self. Yet, when I am in a roof or on a bridge, in any place where I can see down from up high, I hear a voice which tells me to jump, while I drive if Im driving over a large over pass to another FWY, I hear a voice that tells me to drive off. What is this? I know its not me. I would never think of such a thing, I wouldn't even protest by participating in a hunger strike. I think that is stupid to put your life at risk for a cause, when you are more useful to the cause alive not dead.

I once made mention to my partner regarding this reoccurring thought when it came to my fear of heights, he told me he had the same thought to jump from his home in Cuba as it was on the second floor and had a large window in the living room. He said he told the voice, "who are you and what do you want? I will not jump, so leave me alone". He said, he never heard the voice again, but that he too gets the same thoughts while driving. Another lady I spoke to about this said that when she was a child around 9-10 she would always walk by a cliff  going home and every time she walked by she would hear a voice telling her to jump. She said she never did because she was usually with her little brothers and sisters and new that if she jumped so would they.

So what is this good and evil, angels and demons. Is it real do they really exist, is that battle still taking place? And most importantly what side am I on?
at December 12, 2012