Out of the broom closet 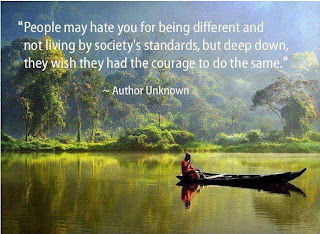 I was never in the broom closet. When I first found my path back in 2000 I never looked back and I never denied my path.

Everyone I know knows the path that I follow, I do not come out and say it the first time we meet for the most part, but sometimes I do...."I'm a Witch". Im also a recovering Catholic and that religion did me great harm. I know first hand how damaging it can be for the image of a young women and her natural sexuality.

With that being said I will go into a most unpleasant experience I had just yesterday. It was the first day back form the Holidays and my co-workers asked how I spent them during lunch. I of course told them of my "Merry Yule in deed" (which you can read about below). One of my co-workers is a hard core Catholic she is even part of the youth ministry and the other is also Catholic by name only, a bit more open minded and less judgmental. She is doing her confirmation so that she can get married with her husband by civil law.

So there I was sharing my wonderful Yule and my hard-core Catholic co-worker basically turned her back at me and completely ignored me. That was not the problem though the problem was that she was sending lots of negative energy my way, I could feel it, it was bad. I found the need to run down stairs to the law firm where I did my internship where there are lots of high powerful women and most are on a similar paths as I.

I went to hug my friend Lana who has begun her Wiccan/Pagan path a few months ago. It was wonderful, we chatted for 15 minutes about her crystal shopping and her dreams. She actually dram with her spirit guide, a native from south america. Well, I told her it was her spirit guide, I think he is. Im glad I have women who walk similar paths close by.

My cousin and I actually talked about being out at work, she said she too works with a hard-core Christian who would not share an office with her is she new she was a witch. She said she does not feel it is her job to teach others about her path. I on the other hand am in your face about it, I want you to tell me something so I can give you my come back. Im a lawyer without a license so I look and create situations that will allow me to make a point. That is just the way I am.

I think Im going to have to talk to my co-worker about her attitude and the energy she sends my way. It is unacceptable in this time and place of our evolution.